Ukulele Vs Guitar: Which One Should I Pick? 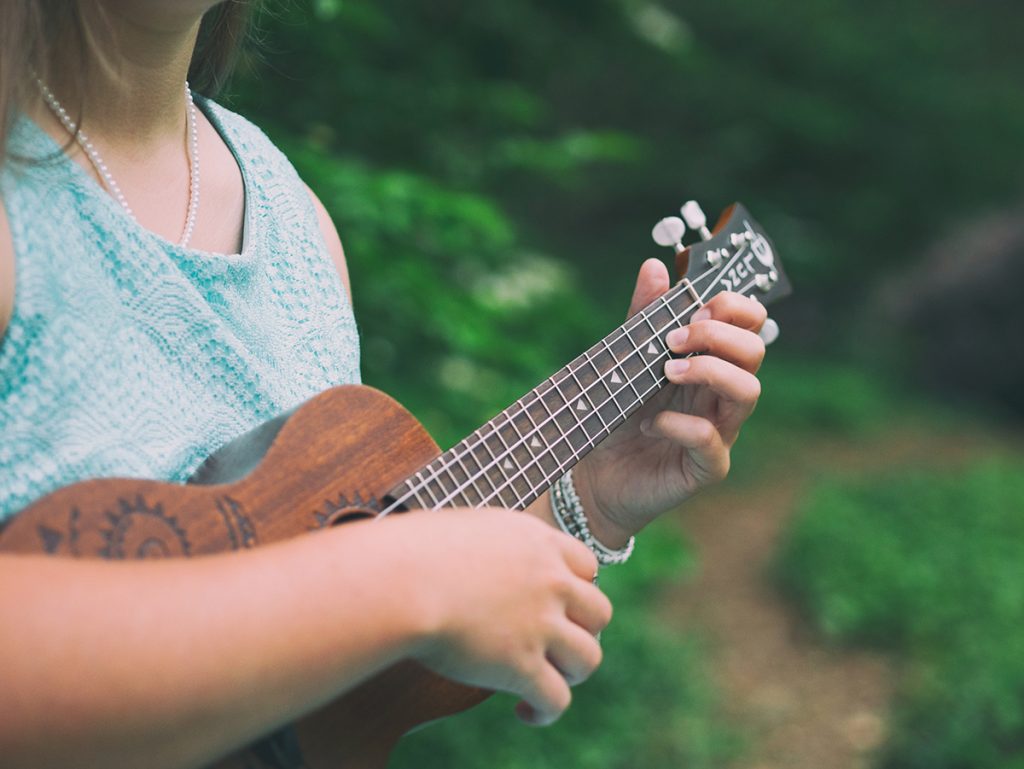 Both the ukulele and the guitar are great instruments that share a lot of similarities. However, if you’re looking at a ukulele as a mini-guitar, you are wrong. While both instruments are portable and enjoyable to play, everything from their size and construction, to tuning, to how you play chords is completely different. Knowing one may help you play the other, but the small differences in each need to be addressed for you to be truly proficient. If you’re looking at the guitar and ukulele and wondering which one is for you, this is the post for you.

The word “guitar” comes from the Greek word κιθάρα (kithara). The guitar’s history dates back thousands of years. Images of stringed instruments appear in carvings that are more than 3,000 years old. Early stringed instruments were created by suspending strings that connected hollow gourds with long sticks. This made way for the European lute and the Arabic Oud. It wasn’t until the early 19th century that guitars started to resemble the six-stringed instruments that we know today. Antonio de Torres Jurado, a Spanish musician and luthier, started creating the style of guitar that would give rise to modern guitars.

The ukulele is the traditional Hawaiian name given to the machete, a descendant of the lute from the Madeira Islands of Portugal. Portuguese immigrants, specifically Manuel Nunes, José do Espírito Santo, and Augusto Dias, moved to Hawaii to work in the sugar cane fields and were credited with making the standardized version of the ukulele we see today. Over time, as people enjoyed the nightly street concerts, the ukulele became a big part of the music culture. King Kalakaua, a lover and supporter of the arts, promoted the use of the instrument and ensured it was a part of all performances at royal gatherings.

The main similarity between these two instruments is that they are both stringed instruments. Soudn is made using strings that are either plucked or strummed over a hollow wooden body. The sound reverberates within the body and is then projected through natural amplification. The strings of these instruments are suspended over a long strip of wood and separated by metal bars. Pressing your finger down on a fret will generate a note. Combinations of frets and open strings produce different chords and scales.

Aside from how they are constructed, these instruments are highly portable. This mades them ideal for traveling, camping trips, and commuting around town.

Starting with the strings, most guitars have six strings while ukuleles have four. The extra two strings on the guitar add increased options for chords, scales, and sound textures. The strings themselves are made of nylon, which is easier to press down on, for the ukulele. For the guitar, the strings are nickel-plated. to the frets, the guitar has 18 frets, while most ukuleles have only 12.

When it comes to sound, acoustic guitars have a broad, loud sound. The ukulele, being smaller, can’t compete with the larger sound of the guitar. That, and the ever advancing world of effects petals being the electric guitar to places that the ukulele could never go.

When it comes to portability, the ukulele is a much smaller instrument. Traveling with it is incredibly easy, making it ideal for young children and new students.

With two less strings, the ukulele is tuned much differently than the guitar. The ukulele’s strings are G-C-E-A, while the guitar’s are E-A-D-G-B-E. For positioning, think about how the strings look when holding your instrument. Holding your guitar, your highest string sits on top, while the lowest is on bottom. For the ukulele, the highest string is on bottom, and the lowest is on top.

The small size of the ukulele make playing scales and riffs harder. This is because the uke has only four strings, and one of the strings is tuned in an unexpected way. The guitar has the advantage because it has more strings and more range. Thus, some songs could simply not translate well from the guitar to the ukulele depending on the range and how the notes are played. Single note riffs typically translate well. Riffs that require multiple notes at one time are harder to play because there is less access to string and not combinations on the ukulele than there are on the guitar. 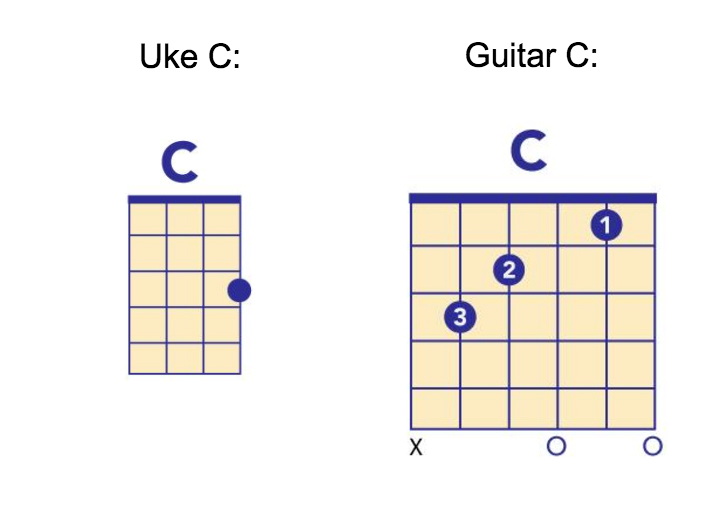 This is where the ukulele really shines. Chords that require two, three, or four fingers pressing down on different frets for the guitar are easily played on the ukulele. Because the frets are so small and close together, full chords can be played with one finger. We already know the guitar’s two extra strings give it a lot more options for chords and alternate chords, but if you want something simple, the ukulele is the one to choose.

Trying to decide which instrument is right for you or your child? Look towards Performing Arts for the perfect place to start.  We offer exclusive 1-on-1 lessons with our qualified instructors who will create a structured & individualized age-appropriate curriculum just for you!